Surely somebody in the Romney-Ryan campaign is making short lists for the Cabinet.  Here's mine:

VICE PRESIDENT - Paul Ryan (R-Wisconsin)  Dick Cheney is said to worship the ground Ryan walks on, ..Pretty good for a long time member of the Republican House Leadership who, himself served as Gerald Ford's Chief of Staff and G.W. Bush's Vice President.   Ryan fits in his relationship to the powerblock in the House: Tea Party independent thinkers.   His Task:  Thrash the budget, eliminate ear marks and make The Economy HAPPEN as Mitt downsizes the American Government in the direction Washington and Franklin intended.

These two iconic founding fathers believed that a federal government should handle a centralized postal system (Ben's idea) and George's thought that America existed to rally the national guard in defending the United States under a central command.  Another founding father, conspicuous by his absence at the two continental congresses that produced both the Declaration of Independence and the Constitution was Patrick Henry who "smelled a rat" as some founding fathers rubbed their hands together in anticipation of a national tax system that has ended up lately building bridges to nowhere in Alaska and Brazilian Butterfly studies!!!  .

NOTE:  In eighth grade at Laramie Junior High School, our civics teacher Mr. Plothow taught us a pneumonic device (my first) to remember the cabinet officers of the president.  It was 1959 at the end of the prosperous Eisenhower 2nd term, the height of the cold war!  Here it is: ST. DAPIACL  Short for State, Treasury, Defense, Attorney General, Post Master General, Interior, Agriculture, Commerce and Labor.   Since then we have added  Health Education & Welfare, Transportation, Energy, Education and Veterans and Homeland Security  at the cabinet level.  (EPA, FBI, CIA etc...all important are not cabinet level positions)

Here's my picks in the order the cabinet officers were added historically::

STATE Jon Huntsman Jr. once Obama's ambassador to China.  Who better to make it stick with our major creditor.  Speaks fluent Chinese.

DEFENSE Leon Panetta former Congressman from California, lifelong Democrat Bi Partisan, former Clinton Chief of Staff.  It takes a while to master the pentagon.  Romney will downsize this department considerably.

ATTORNEY GENERAL Dallin H. Oaks - Former chief clerk to Chief Justice Earl Warren on the Supreme Court of the fifties; Former Dean of the University of Chicago Law School; former Justice of the Utah Supreme Court.   Would be the first LDS apostle to serve in a president's cabinet since Ezra Taft Benson was Secretary of Agriculture for both Eisenhower terms.

HEALTH & HUMAN SERVICES -  Rodney Brady; former deputy Secretary in the Nixon Administration, Harvard PhD in business; former president of Weber State College and CEO of the Bonneville Broadcast Group; former President Deseret Pharmaceutical; Member of the Board of the Boy Scouts of America.

EDUCATION - Cede to the States

CHIEF OF STAFF:  Distinguished Names of the past: Don Rumsfeld, Dick Cheney, Leon Panetta, who have all gone on to bigger and better positions running things--or as in Rumsfield's case, thinking they could.  Paul Ryan would best qualify in my view, maybe one of Mitt's sons....Mike Leavitt?   Stay tuned.

For the record, here's an official White House Portrait of the current cabinet (Leon Panetta is now at Defense...formerly with the CIA) 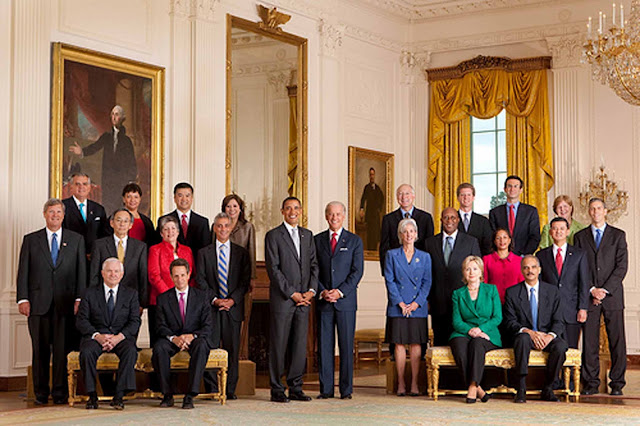 Posted by Jon Robert Howe at 2:16 PM No comments:

What is the test?  How does a President end up here?  There is a formula and it's simple:  To be memorialized in stone in North Dakota a President must be a game changer.  Let's look at the record: 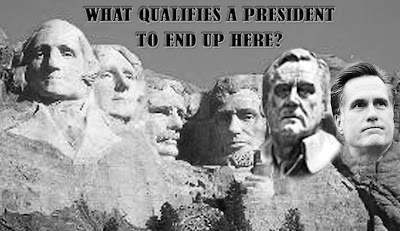 Of the 43 men who have been president of the United States, there are some truly clear choices of who were the most important and influential presidents. There were also many who would never have made the list. My picks for the top ten influential presidents were based on their historical influence and their actions while in office. This was a tough list to create - especially once we move past the 7th president. If one more could be added it would be Ronald Reagan. He helped bring the Cold War to an end after years of struggle. He definitely gets an honorable mention for this list of influential presidents.

Abraham Lincoln saved the Union during the American Civil War. His leadership during the war was one of no compromise but at the same time understanding that he would eventually have to unite the states once the North won the war. His actions eventually led to the abolition of slavery across the United States.

2. Franklin Delano Roosevelt
Having won four terms as president, FDR was sure to have a huge impact on the United States. His leadership throughout World War II was key to our victory. Further, he worked tirelessly to end the Great Depression including the creation of numerous programs through his New Deal to help Americans get back on their feet.

3. George Washington
As the first president, Washington couldn't help but set precedents that were followed by later presidents. His lack of a desire to be seen as a 'monarch' was an extremely important part of creating a citizen president. Also, the fact that he retired after two terms set a precedent only broken by Franklin Roosevelt. After Roosevelt's death, the two-term limit was added as the 22nd amendment to the Constitution.
4. Thomas Jefferson
Through Thomas Jefferson's Louisiana Purchase, the size of the United States doubled overnight. Jefferson was a strong states' rightest who also realized the need for consolidating power in the federal government in certain instances.

5. Andrew Jackson
Jackson's election showed the rise of the common man. He was the first president elected from humble beginnings. His popularity was huge. Further, he was a strong nationalist who often made controversial decisions such as the removal of Native Americans east of the Mississippi. He was president during the 'Trail of Tears'. He also fought against the national bank.
6. Theodore Roosevelt
TR was an extremely influential president. Not only did he earn the title of 'Trust Buster' as president by fighting against corrupt businesses, but he also was deeply committed to conservation. He established numerous national parks to preserve the wildlife that was quickly being overtaken through industrialization.
7. Woodrow Wilson
Wilson piloted the ship that brought America onto the world stage. He made the first steps of leading us out of isolationism, violating Washington's tenet of avoiding foreign entanglements. He led America during World War I. His fervent hope was for the US to join a League of Nations, the precursor to the United Nations.
8. Harry S Truman
Harry S Truman took over after the death of Franklin D. Roosevelt. He made one of the hardest decisions in American History by deciding to drop the atomic bombs on Hiroshima and Nagasaki. He presided over the end of World War II and set precedents for leadership during the beginning of the Cold War.

After Thomas Jefferson, James K. Polk increased the size of the United States more than any other president through the acquisition of California and New Mexico as a result of the Mexican-American War. He also claimed Oregon Territory after a treaty with England. He was a key figure in Manifest Destiny. He was also an extremely effective leader during the the Mexican-American War. He is considered to be the best one-term president.
10. Dwight Eisenhower
During Eisenhower's time in office, America experienced a great amount of economic prosperity. Eisenhower also provided crucial leadership during the Cold War.

Obama and Romney -- who is likely to end up "there"

Posted by Jon Robert Howe at 9:57 PM No comments:

Jon Robert Howe
Jon Robert Howe is first last, and always a seeker of truth who is happy to share--an educator experienced in multimedia ways to make learning memorable. He has been in turns a newspaper photographer, radio news broadcaster, professional Santa Claus, actor, video producer, musical playwright, graphic and Internet designer, marketing executive and innovative blogger. In his computer classes, Jon loves to teach hungry students the presentation computer techniques that he is always polishing and using. He really enjoys leading church classes using his multimedia skills to not only keep his students awake--but more, to help make the lessons “stick” in the minds and hearts of his fellow students.